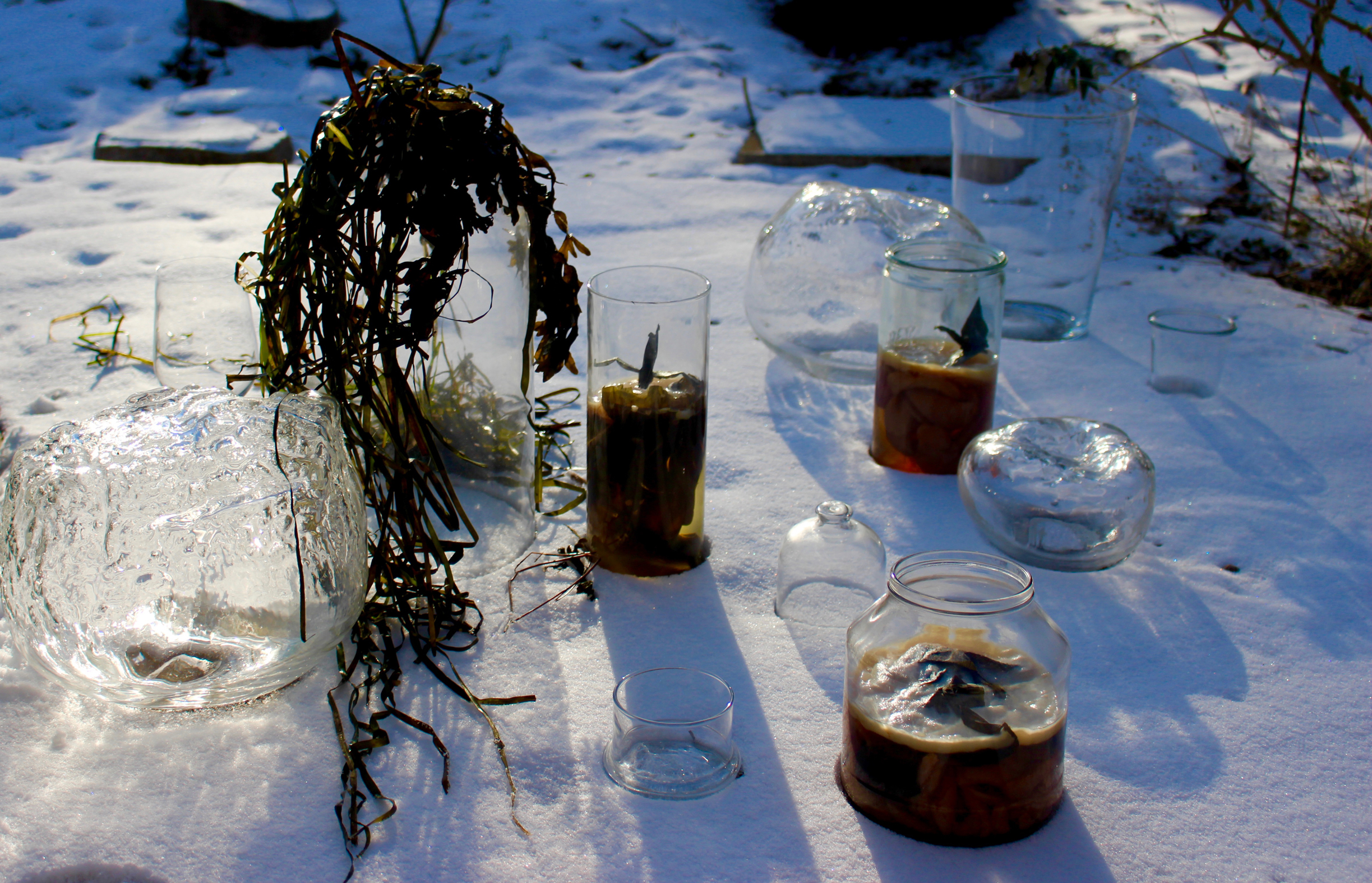 The exhibition Postsecular Reflections II was to be held in c4 projects in January / February 2021. Instead, we present the artists’ projects online.

Jette Hye Jin Mortensen (DK) and Rickard Eklund (SE) are often inspired by scientific topics such as genetics or quantum mechanics, but at the same time they challenge the ranking of physical and spiritual experiences. They work with different materials in a transformation process, through which new encounters between matter and spiritual dimensions can arise.

“When I had my first son, I took a DNA test. Since I am adopted, I wanted to know for sure what I would pass on. It showed I was primarily of Korean descent with a significant high percentage Japanese. Knowing Koreas bloody past with Japan, it wasn’t joy at first sight. When I had visited wooden Buddhist temples, signs always said “..burned down by the Japanese, restored in..”. Every cultural trait had been attempted wiped out in a massive, colonial wave of violence. And this violence was right there, present in my body. Of course the landscape, the oceans and even the gut itself don’t mind these emotional, collective wounds; they bleed into new territories like slow liquid.Somewhere, in the past, among those islands that would become Japan, an enzyme from a marine bacterium called Zobellia galactanivorans found its way into the genome of the human stomach bacteria B. plebeius. An enzyme, which had a profound ability to derive nutrients from red algae, also known as nori seaweed. As if the ocean had crawled right into the human gut, it is also said that people in the past used to study the whales; when they gave birth, they would eat great amounts of seaweed to nurse their calves. In Korea that led to the traditional seaweed soup miyeok-guk, a dish always made for new mothers. 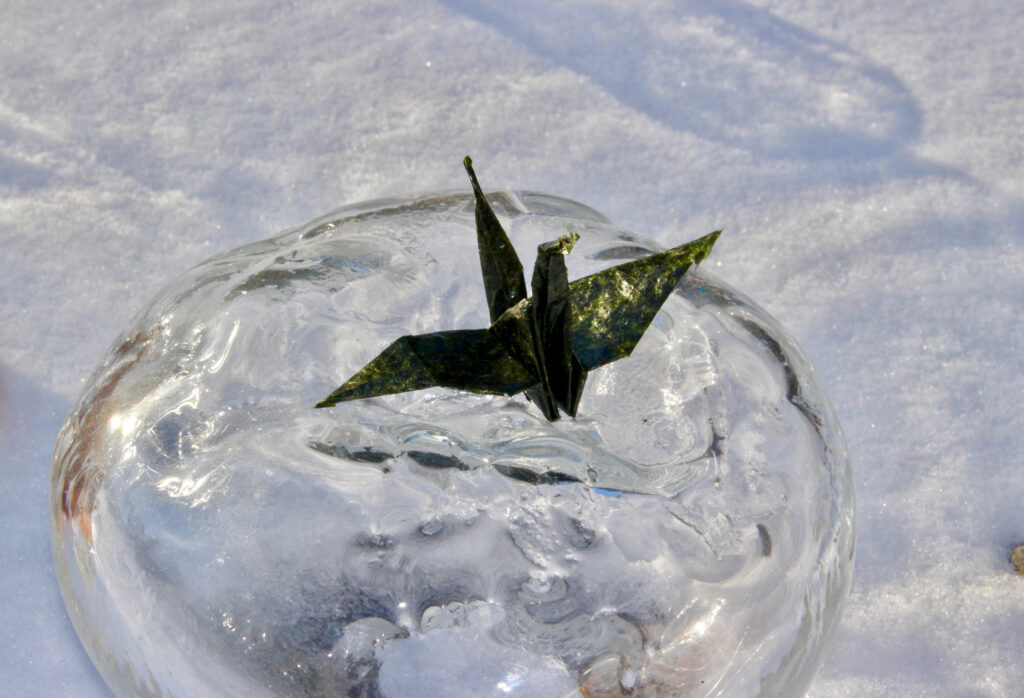 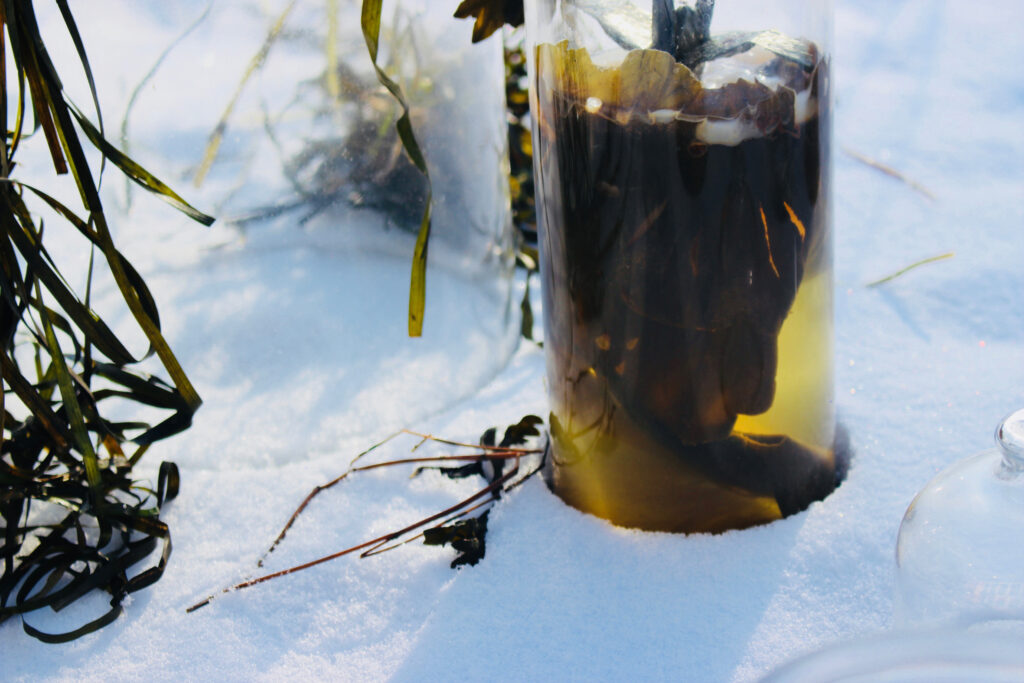 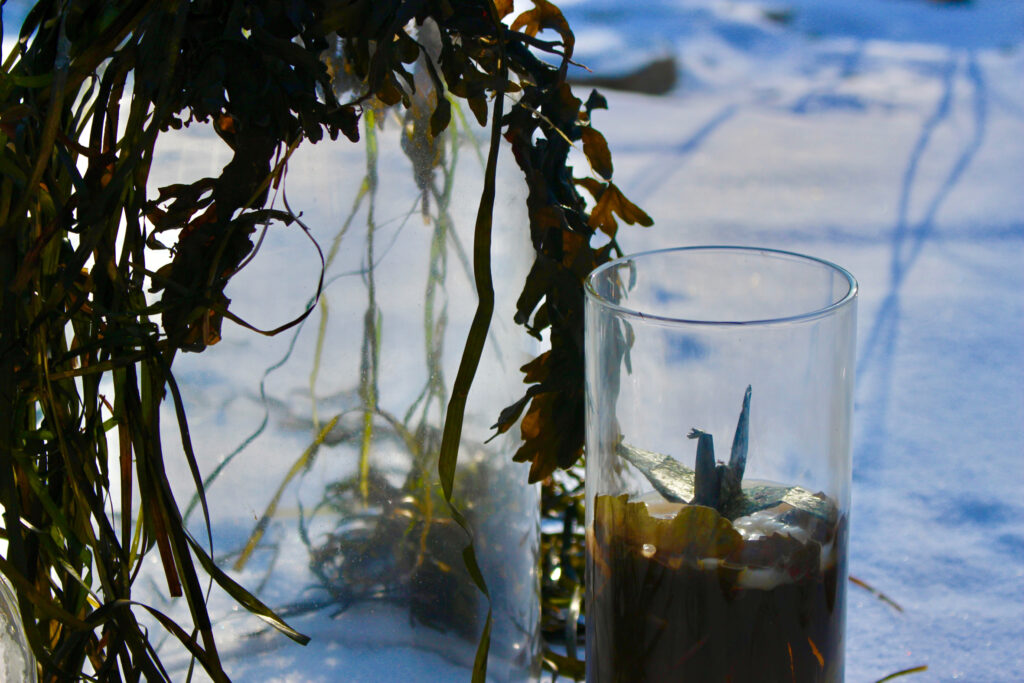 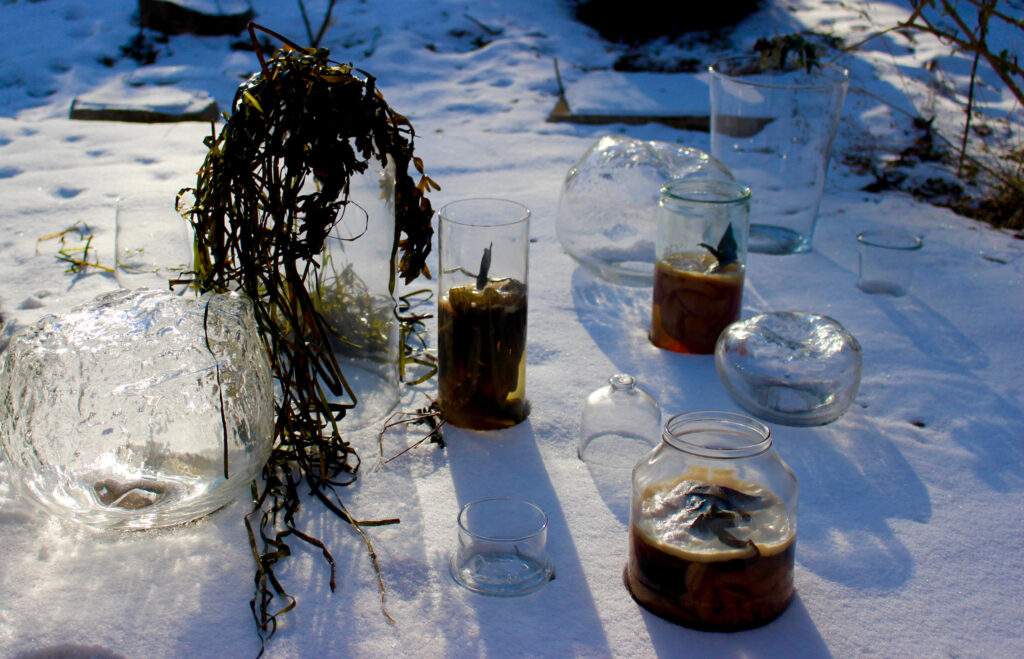 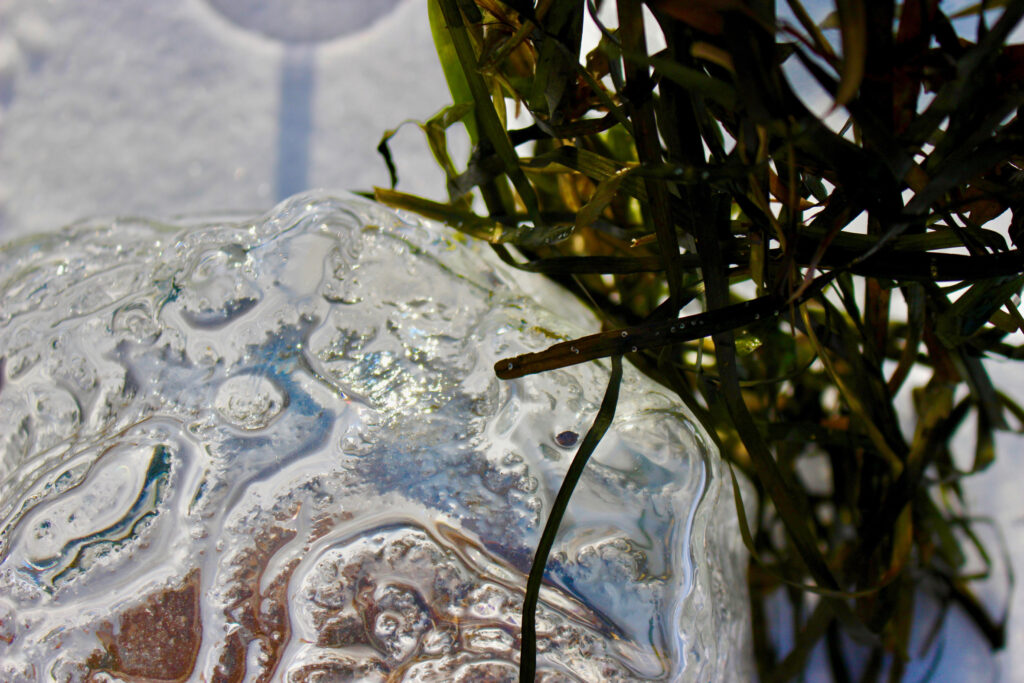 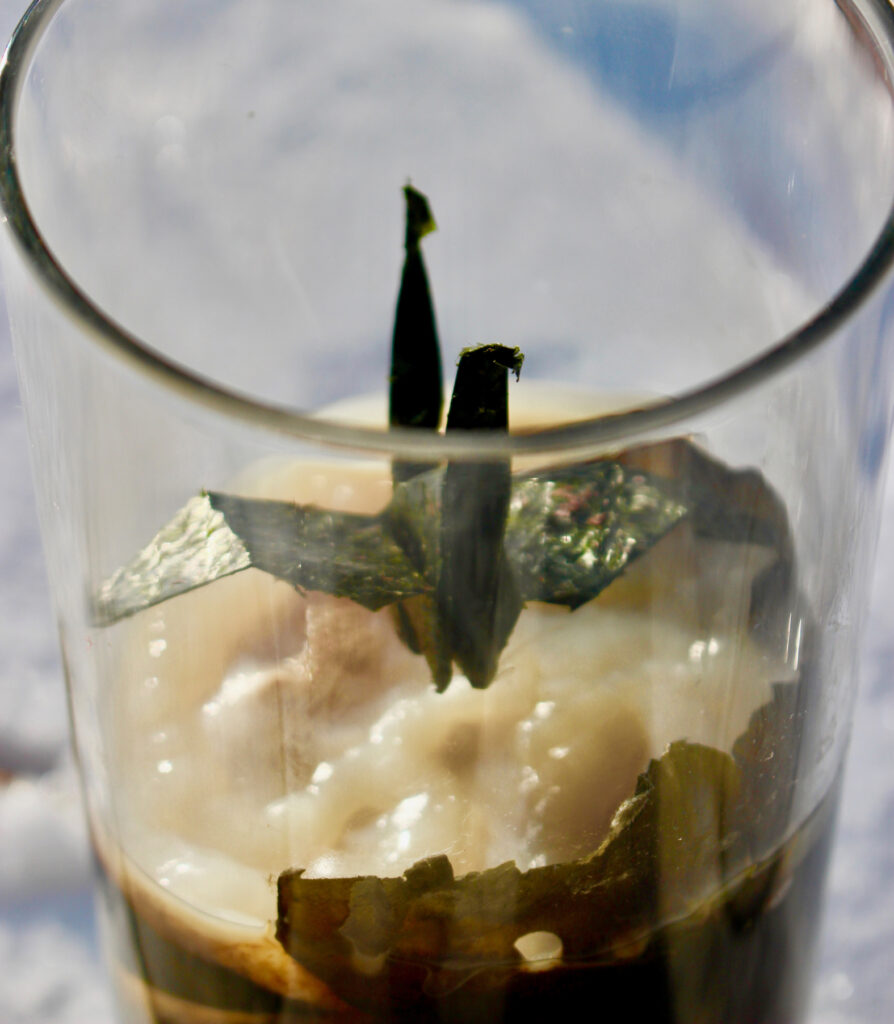 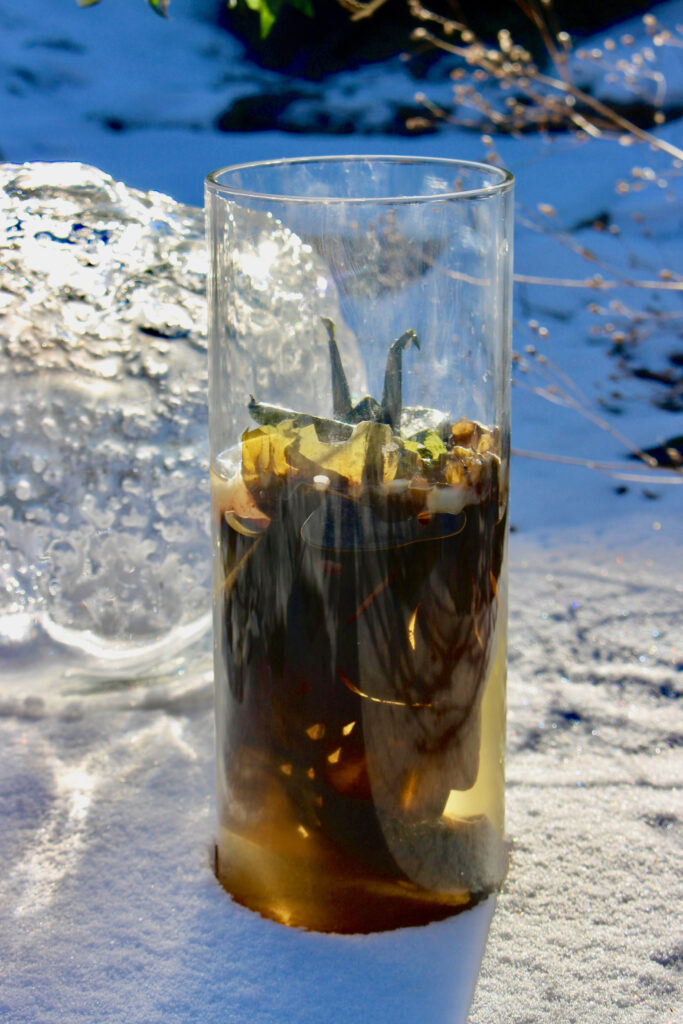 Jette Hye Jin Mortensen (1980) is a visual artist born in Korea and living in Denmark. In 2010 she graduated from The Royal Danish Academy of fine arts. Receiver of the 3-year work stipend from The Danish Arts Foundation in 2015.

More about the artist: https://www.jettehyejinmortensen.com/

Information is indestructible (in mysterious ways, everything stays) 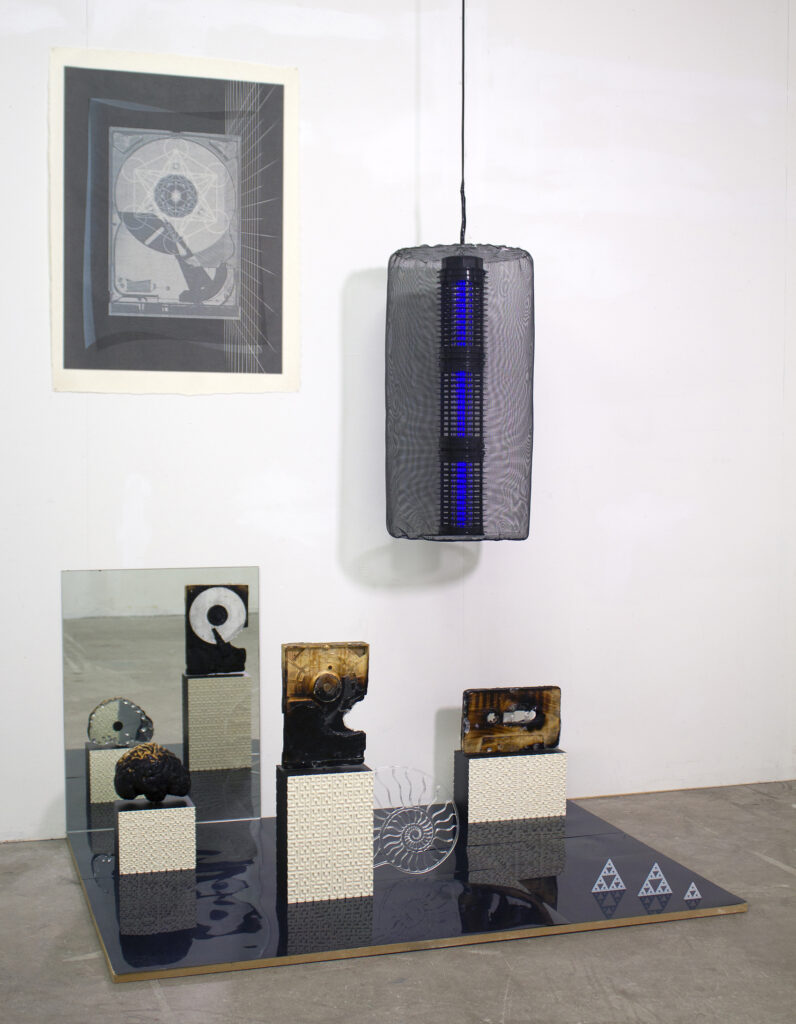 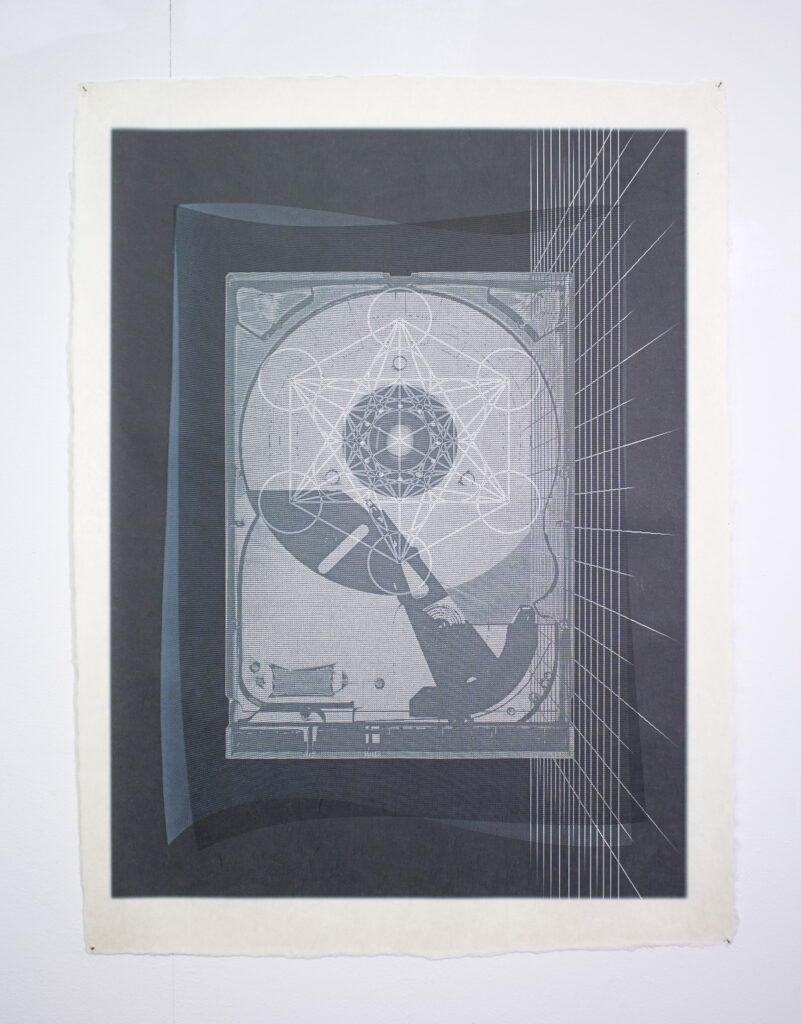 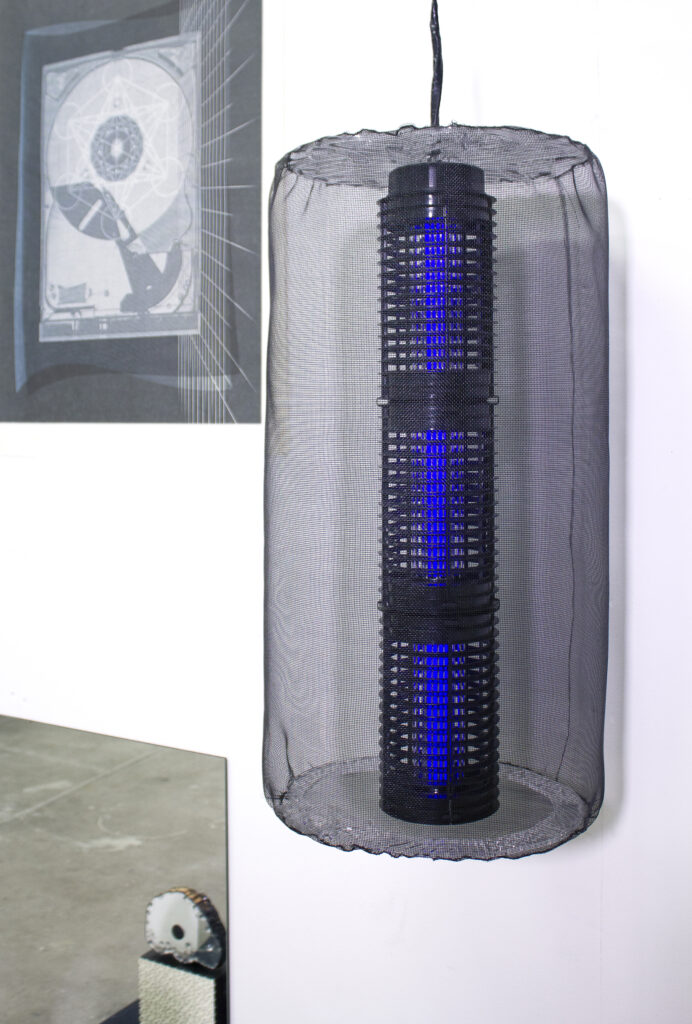 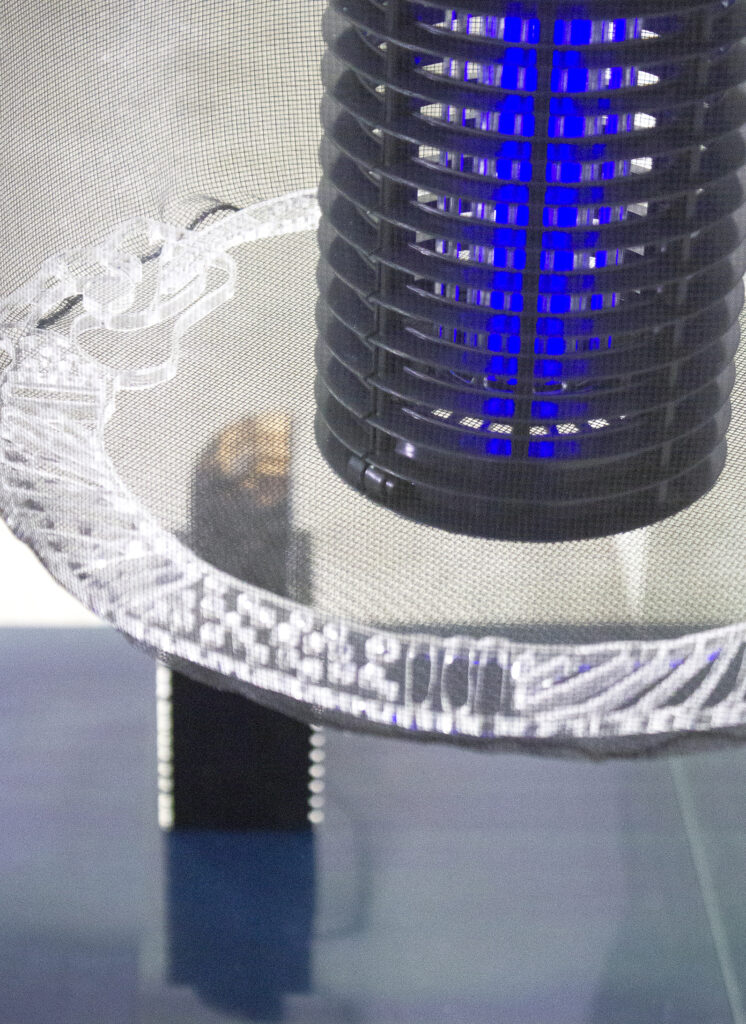 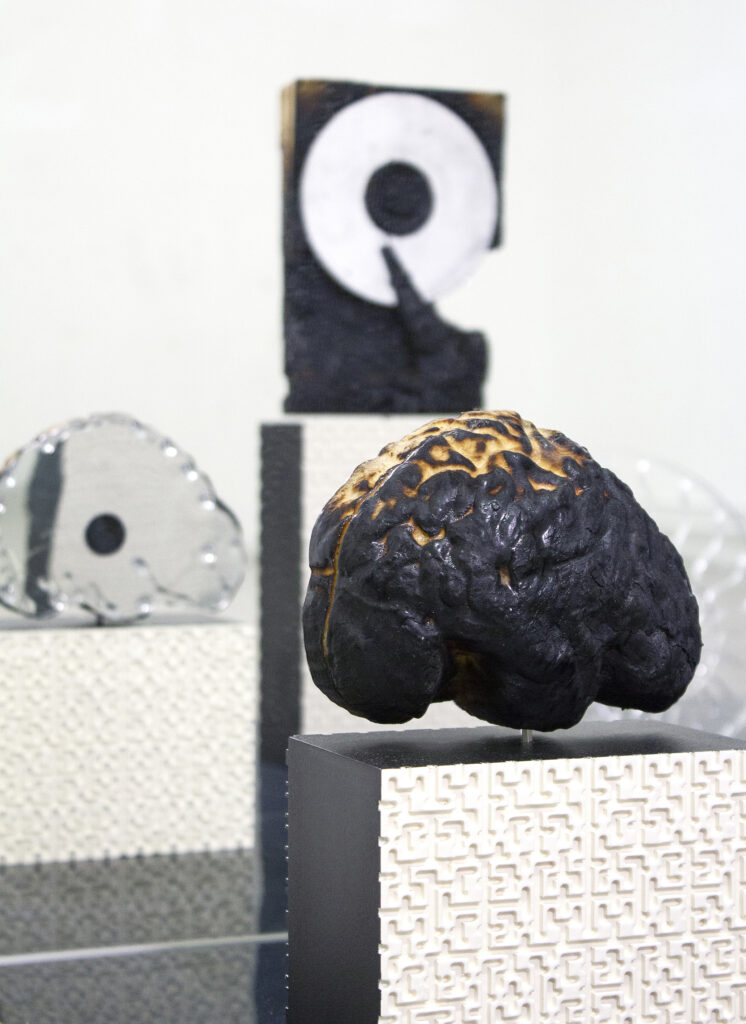 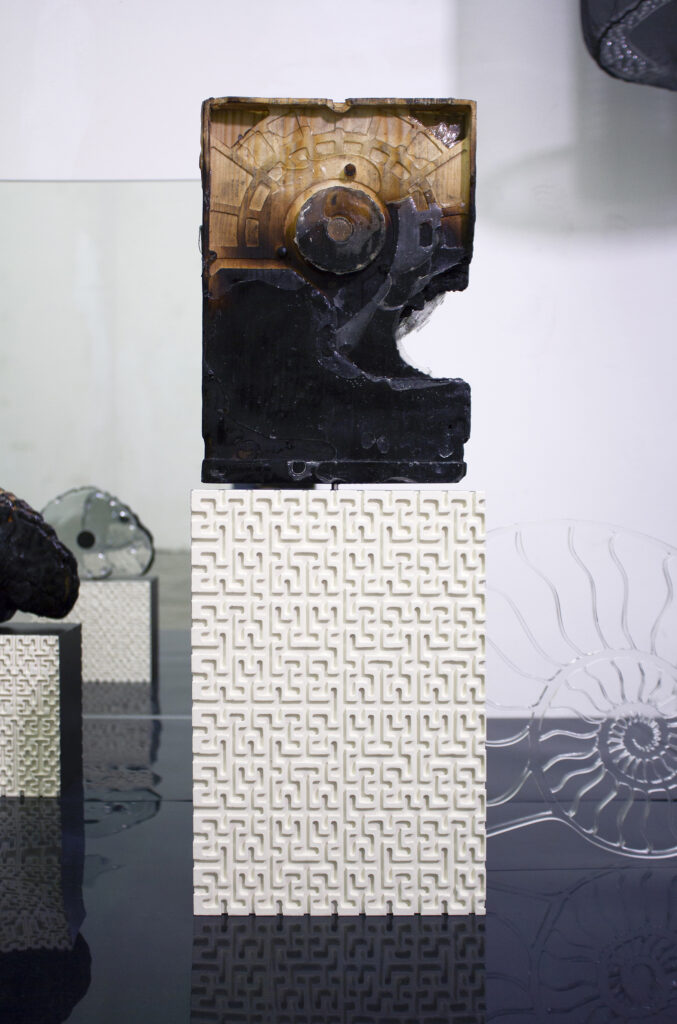 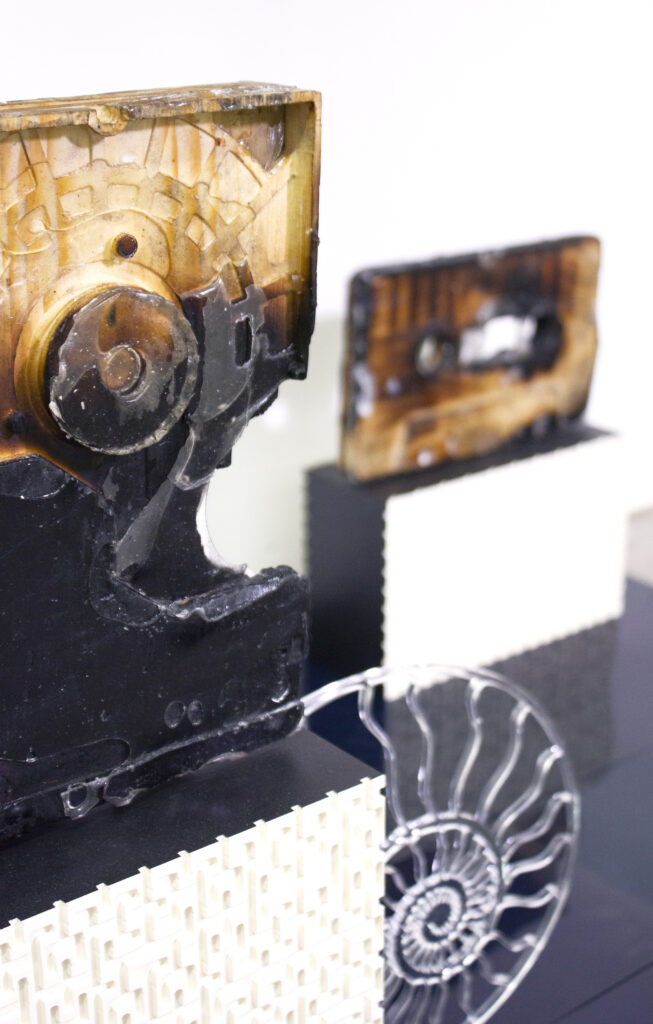 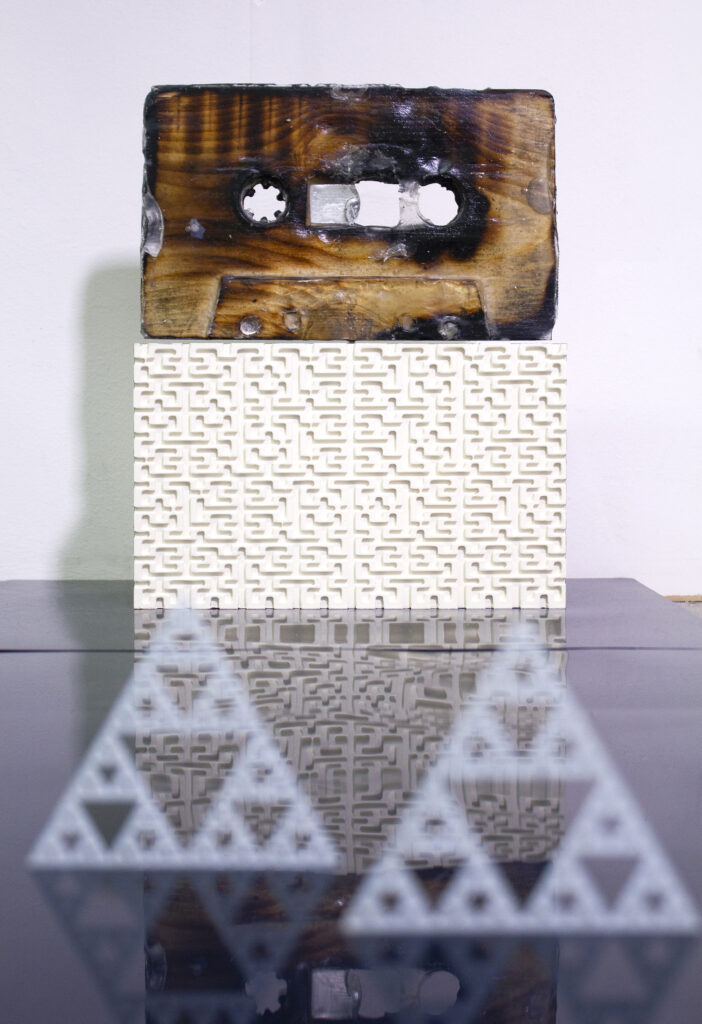 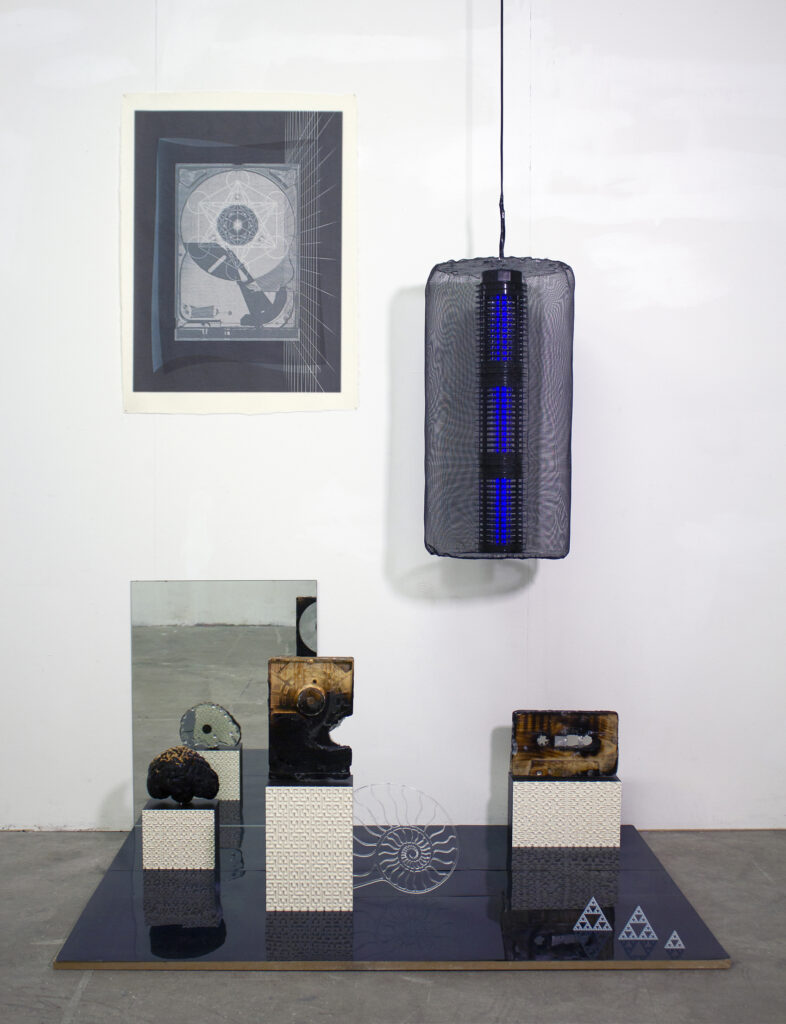 For Post-secular Reflections II, Rickard Eklund created a new series of sculptural works and graphics while thinking of the relationship between technologies of remembrance, 2D-representations of foreverness and how, or if, change is unchangeable.

Here are shapes of memory storages recreated in wood: a cassette tape, a hard disc drive and a brain, burnt to charcoal, but then partially surrounded by a translucent shell cast of it’s former shape, like ashes encased in its ghost. Where the data would be stored in the devices, there are mirror surfaces, referencing the indestructible nature of information being embedded in the present, as proposed in theories of quantum mechanics. Forever excavatable, given all factors are present to process in reverse.

There’s a bug zapper construction behind a dark shifting veil that beckons with a deadly light, yet remains out of reach.

Seen are also shapes of infinity symbols and fractal patterns, an iconography gathered from different times and places, but with the potentials of endlessness in common.

Charcoal, mirrors, meshes and sign systems are some recurring elements in Rickard Eklund’s art. Found materials and images are reworked and reassembled by technological means and graphical techniques into comprising thematic installations of several interplaying works.

Inspired by mythology, semiotics and sci-fi, Rickard’s works often make reference to liminal states or shifts in perception in various ways – through dreamlike visual forms or by intertwined combinations of concepts and symbols.

Rickard (b.1987) has studied at Valand Academy in Gothenburg and the Royal Academy of Arts in Stockholm. As part of his artistic practice, he also designs record covers and music videos, as well as manages and curates the artist-run gallery Upper Hand and is a board member of Gallery BOX, both located in Gothenburg.

More about the artist: www.rickardeklund.xyz

c4 projects is an artist-run exhibition space that emphasizes an exploratory approach to art, curation, and communication. Postsecular Reflections II is part of c4 projects’ 2-year-programme: The Intimacy Programme 2019/2020. With fourteen exhibitions c4 projects wish to strengthen its profile with an ambitious and international programme. The Intimacy Programme wants to explore the mental intimacy and the bodily provocative, the private sphere, beliefs, and sexuality and through an immersion into the different aspects of intimacy.
The exhibition program is kindly supported by The Danish Arts Foundation, Copenhagen Municipality Council for Visual Arts, Den Obelske Familiefond and Beckett-fonden.